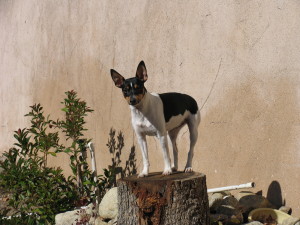 Everyone loves the Rat Terrier — Even the President of the United States. In 1901, when President Theodore Roosevelt and his family moved into the White House, it was suffering from rat infestation. The rats had learned to avoid the traps and poison that had been set out to eradicate them. Finally, in desperation, the President unleashed his two Feist Terriers to see what they could do with the rat population.

The Feist Terriers were so good at killing the White House rats that President Roosevelt affectionately called him his “Little Ratters.” This is how the Rat Terrier got his name.

The original Rat Terriers were the result of cross-breeding using the Fox Terrier and the English White Terrier, Manchester Terrier and the Bull Terrier. (For those of you who have read Laura Ingals Wilder’s “Little House” books about the Wilderness Crossing, the Ingals family had a Bull Terrier named “Old Jack.”)

Later on, the offspring of the Bull Terrier and others were bred with Beagles, the Smooth Fox Terrier, Toy Fox Terriers, Italian Greyhound, Whippets and other Feist breeds. (A feist is a small dog used for hunting squirrels and other small game.)

When pesticides were developed and used on the farm, the Rat Terrier lost his popularity because his job of killing rodents was replaced with poisonous chemicals.

Later on, the Rat Terrier was bred with the Toy Fox Terrier, Chihuahua and the Jack Russell Terrier. The reason for this interbreeding was the small breeding stock of Rat Terriers. This “breed of many breeds” was approved by the United Kennel Club or UKC in 1999.

The Rat Terrier has had a big comeback.

Rat Terriers are very comical and love to be in the middle of whatever is going on in the family. They LOVE to play. “Fetch” is one of their favorite games.

Ratties need a lot of exercise, and a daily walk would suit a Rat Terrier just fine. They get along with other dogs and even cats — as long as those other animals are in his OWN family.

Ratties are highly intelligent, and they have a stubborn streak. You will want to keep your Rat Terrier on a leash when he is out of your yard because he can take off running in a nanosecond. They also like to tunnel and dig; however, our Rat Terrier doesn’t dig at all.

Most Rat Terriers have a different sort of voice. When they are irritated, they will grumble and kick their back legs. Our Rat Terrier is hyper-vigilant to sounds outside, and he loves to bark. When we call him, though, he will come back inside the house.

Ratties have a sleek coat of white, brown and black hair. Some Ratties are all white and others may be brown and white. Our Rattie has a coat called Tuxedo because it looks like he has on a little black vest. The fur of Rat Terriers is easy to take care of.

If you are looking for a good watchdog, the Rat Terrier fits the bill. Ratties are very loyal to their people.

We Love Our Rat Terrier:

We got our Rat Terrier from our daughter when she had to move and couldn’t take Max with her. Had I known how cute, smart and comical Rat Terriers are, I’d have a houseful of them! As it stands though, when our grandson told us that he wanted his dog back and his mother said, “Okay,” we told them that they could come and visit their dog whenever they wanted to. We kept the Rattie and they got another dog. We fell in love with our Rattie and just couldn’t let him go.

Rat Terriers are not recommended for families with small children. They get possessive of their food and toys. Our Rat Terrier, though, has always been great with kids.

If you are looking for a dog that will entertain you and be your fast friend, then the Rat Terrier is definitely for you.