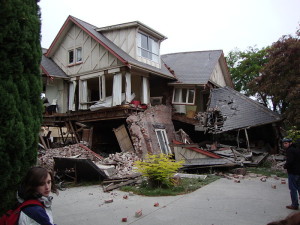 As if we didn’t have enough to worry about, now two self-proclaimed prophets in the fundamentalist wing of Protestantism are warning of a 9.7 earthquake in the ocean off the coast of San Francisco on October 3rd in the afternoon. The Golden Gate Bridge is supposed to split in two and become vertical, and a huge tidal wave is predicted to follow. I know that these people are well-meaning, but they are telling people to leave California before October 3rd, which is two days away. Really?

I am a Christian — a Catholic Christian — and I don’t see why God is revealing this supposed happening to only the fundamentalists. God hasn’t lost my number; nor has he lost the Pope’s. And He didn’t give us a spirit of fear but of power and of love and of a sound mind.

When I was in the supermarket today, I almost picked up some bottled water and “emergency” rations, like spam, crackers and packaged tuna. But then I remembered that I had already stocked up on that kind of food and water after writing a series of articles on survival a few months ago. But, still, the impulse was there.

It never hurts to be prepared for emergencies, but these earthquake predictions are beyond the pale. Some fanatical religious folks waste so much time worrying about the end of the world, earthquakes and asteroid impacts. My philosophy is that if God impresses on me that we are going to have a national disaster, I will proceed accordingly. Until then, I am going to keep myself in a state of grace, pray the Rosary and go to mass. The rest of the people can build bomb shelters and an ark for themselves and all the animals.

What will be will be. And if the earth shakes, rattles and rolls on October 3rd, I’ll just hang on tight and ride it out. Then I will eat my words.