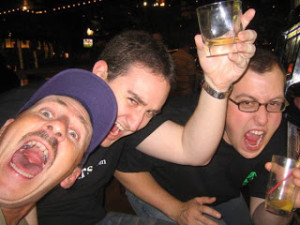 An Australian researcher has uncovered new evidence that immune cells in the brain may affect how people behave when under the influence of alcohol. This would include changes in motor function, such as difficulty in controlling the muscles that regulate walking and talking. Researchers found that there was a correlation between the immune responses in the brain and behavioral responses to alcohol.

Certain receptors in the brain activate the immune system when they encounter foreign substances that have breached certain barriers to and inside the body, such as the skin and the gut wall. The brain receptors that do the activating are called TLR4 or “toll-like” receptor 4.

By using drugs to inhibit TLR4 signaling in the brain (or actually block this part of the immune system), the behavioral effects of alcohol were reduced. This means that alcohol causes both an immunological and neuronal response.

According to Dr. Mark Hutchinson of the Australia Research Council:

“Such a shift in mindset has significant implications for identifying individuals who may have bad outcomes after consuming alcohol, and it could lead to a way of detecting people who are at greater risk of developing brain damage after long-term drinking,” he said, explaining that “drugs targeting TLR4 could help treat alcohol addiction and overdoses.”