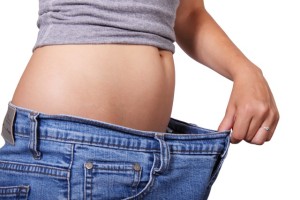 Modern society eats a supersized diet. We’ve become accustomed to eating gargantuan portions of everything. We eat huge, fat-filled, salads that are passed off as being healthy. We love our large portions of French fries, hash browns, mega-burgers, and don’t forget desserts like the Molten Lava Cake at Chili’s. The Molten Lava Cake boasts no low-calorie claims, though, and kudos to Chili’s for having a low fat/low calorie menu for its weight-conscious patrons.

Weight loss is based on less intake. You can have more food, however, if you eat foods that are low in calories and fat. In the long run, though, it boils down to controlling the size of your portions. You can eat salads and 300-calorie premade meals for so long. But at some point, you’re going to want a good old fashioned Bob’s Big Boy Hamburger with all of the fixings – if for nothing more than the taste and texture. You don’t have to give this up forever.

A good alternative to the hamburger idea is to share it with your spouse and have a salad on the side with low-fat dressing. This way you are getting all the taste but not all of the calories. In fact, you can eat just about anything you want, as long as you stay within your personal calorie requirement.

By learning to control your portions, you can control just about everything else associated with eating. Buffets, now, are less hazardous to your diet because you have an idea of how much you can eat and how big your portions should be. In dieting, practice makes perfect.

Your goal in learning portion control is to change the way you see and handle food. When you realize that there’s more where that came from, you can take less and probably be satisfied with just that. If you wait a few minutes after eating before going back for seconds, your brain will realize you’ve had enough and your appetite will diminish. Remember that it takes 20 minutes for your brain to catch up with your stomach. If you feel you must have seconds, though, pick veggies and other low-fat/low calorie salad items.